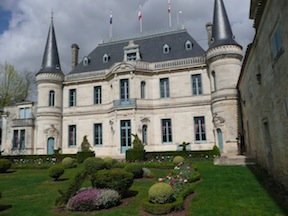 After lunch at Angludet, we motored over to Chateau Palmer, which is jointly owned by the Sichel and Mähler-Besse families. Palmer is a beautiful château. Although classified as a third growth of Margaux, Palmer is certainly the quality of a top second growth (a super-second) and fetches prices befitting its quality. 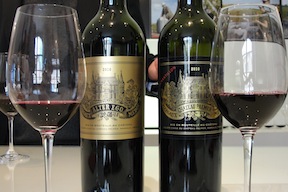 Château director Bernard de Laage de Meux hosted our tasting of the 2010 Palmer and its second label, Alter Ego. Both wines were excellent but the Palmer was stunning. It would turn out to be one of the top five 2010s we tasted during our stay in Bordeaux. The Palmer was purple/black with about 5% Petit Verdot, the balance being equal parts Cabernet Sauvignon and Merlot. Sleek, intense, powerful. RP is 95-97 points, WS is 95-98 points (92-95 for Alter Ego), 19.5 points (out of 20!) for Decanter.

Our host Nicolas Idart with a pensive representative of the Marquis

After Palmer, we went to fourth growth Marquis de Termes, also in Margaux. Alas, Palmer was a hard act to follow and the Marquis’ wine could not compare so it probably seemed a lesser wine than it really is. 17 points Decanter.

We next turned northward to Saint-Julien and stopped at Château Gruaud-Larose, a second growth on the South side of the appellation. This was an excellent Gruaud with more power than usual but with Gruaud’s typical smoky nose. RP is 92-94 points, 93-96 points for WS, 18 points for Decanter.

Nearly across the street from Gruaud, was Chateau du Glana, a modest and unclassified estate but one of high quality. I liked this usually modestly priced wine; it was beautiful and balanced but without the power of the big boys. We’ll have to wait to see the cost of the 2010 but I hope it stays modest. Decanter gave it 16 points.

After Glana, we went North to Pauillac and second growth Château Pichon Baron de Pichon de Longueville (or Pichon Baron for short). What a stunning, gorgeous Château (same architect as Palmer)! The Château was framed in front by a reflecting pool and on both sides by monumental style buildings evoking ancient Egyptian tombs. The building with a papyrus-like scroll on top turned out to be the elaborate barrel cellar (or chai) and tasting room. 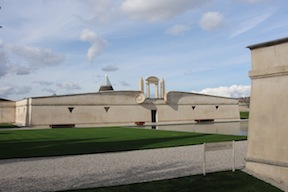 It was here that I learned how high-tech these classical looking estates can be. They showed us a state-of-the-art laser grape sorting unit and our guide admitted they owned an expensive reverse osmosis machine, hidden away.

Nevertheless, the truth is in the wine. To demonstrate the greatness of the vintage, they generously permitted us to taste it alongside the fabulous 2005 and 2009 vintages. 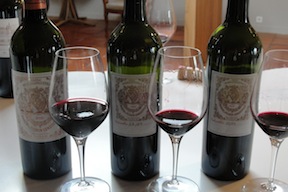 Three glasses of wow! All three were intense and concentrated, with the 2009 showing more opulence and flesh and the 2010 showing raw power, coiled up tightly like a cobra. The 2010 was rated 97-99+ points from RP, 95-98 points from WS, and 18.5 points from Decanter.

The full line up at Château Lynch-Bages

After this amazing visit, we tooled up to fifth growth Château Lynch-Bages. Like Palmer, it should be re-classified up to a third – or possibly second – growth. No grand neo-Egyptian estate here, just a lot of good wine! The flagship was big and rich, with more concentration than usual. Parker rated it at 95-97 points, WS was 95-98 points and Decanter at 18 points.

By the way, we also tasted the Lynch Blanc of which I am a big fan. The second wine, Echo de Lynch-Bages, was excellent, too. The family also owns the Cru Bourgeois Les Ormes de Pez in Saint-Estèphe. This 2010 was outstanding. WS is at 91-94 points, RP at 87-90 points and Decanter at 17 points.

From Lynch, we turned to the Haut-Médoc and Château La Tour Carnet, a fourth growth. This is a jewel of an eleventh century crenellated fortress surrounded by a moat. 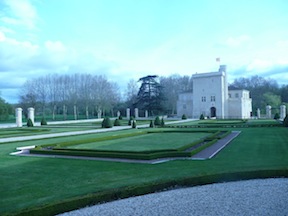 We walked the cross-bridge and admired the beautifully restored building, touring the mural-and tapestry-laden walls. This was the last of our day’s tastings of the 2010 vintage. I can’t speak for my colleagues but my palate was tired, especially after tasting these monsters. I thought this 2010 was good but not in the same league as the Palmer, Lynch or Pichon Baron. It was a chunky monkey! Parker rated it at 92-94 points, WS at 89-92 points and Decanter at 17 points.

After such a grueling, tough day (OK, I’m exaggerating!), we turned back to Angludet for dinner. We had plans to go to a restaurant but they are closed on Mondays! This turned out to be a very good thing, though.

James Sichel is an incredible host. After starting off with the Champagne 1999 Cuvée William Deutz, we then tasted the ultra-rare 2008 Vin Blanc de Château Palmer. 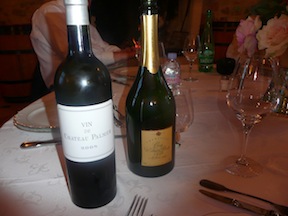 The rare white Palmer. You cannot buy it.

This wine is only given to Palmer’s shareholders and is not eligible for appellation status. It is mostly Muscadelle with Merlot Blanc and the unknown Lauset. It was delicious but you cannot buy it, alas.

Something fishy is up at Angludet!

It’s funny; I can’t recall the food but the wines are crystal clear! We tasted all the reds blind and started out with 1940 Château Latour, of all things. For some reason, he thought it would be the weakest due to its age and color but it was terrific. 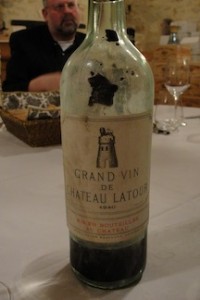 Upon examining the bouquet, James uttered his famous “ahhhhhhhh!” It’s a cross between an exclamation and a deep-throated growl and we imitated it throughout the entire trip.

Next wine turned out to be 1964 Carruades de Lafite, followed by 1975 Lafite and ending up with the 1983 Montrose. 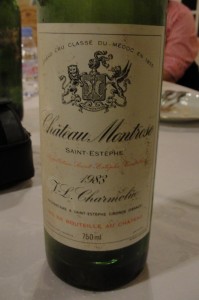 Château Montrose 1983 before we drained it 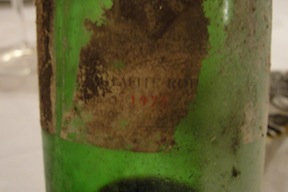 Yikes! All were drinking beautifully, impossible denials of their age. We were almost swooning. I will never forget the evening.

Tired, we set out on our long, dark, evening’s drive back to Cap Léon Veyrin to spend the night. Tomorrow was to be another long day but we had no clue as to how long it would actually become.