With our tight schedule, we were limited two just five châteaux on the Right Bank; two in Pomerol, three in neighboring Saint-Emilion which is one of France’s most beautiful wine towns. Afterwards, we would drive to Graves and visit another five estates. Thence to dinner at Château Mayne-Vieil in Fronsac.

The night before, after tasting many great wines at Château Angludet, we figured it was a good time to re-assess our itinerary. At the end of day three, we were supposed to return to Cap Léon Veyrin for the night and leave the following morning, the 30th, for the Northern Rhône valley. Instead, we thought it would be far more efficient to leave from our last stop in Fronsac and do a wee bit of late night driving on our way to the Rhône. Brilliant! We would stop in Toulouse at midnight and then leisurely motor our merry way to Hermitage by 1:00-2:00 p.m. Thus, firm in our new resolve, we packed up our bags and went to bed around 1:00 a.m.

There is no classification of châteaux in Pomerol, the smallest appellation in Bordeaux at under 1900 acres. Merlot is the principal grape here comprising 80% of total plantings. It does well in the iron-rich clay soils and clay/gravel marls. Otherwise, Cabernet Franc and a small amount of Cabernet Sauvignon are planted on more gravelly soils. 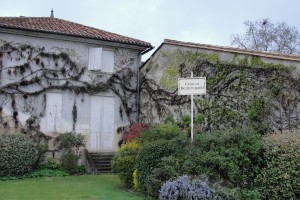 Beauregard, as its name implies, is a beautiful estate; much more modest than the grand châteaux of the Médoc. In fact, there no Médoc-style grand estates in Pomerol. We tasted the 2010 Beauregard direct from barrel. 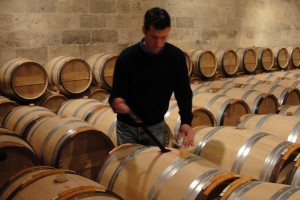 The 2010 Beauregard fresh from barrel

It was fairly tannic. Feeling sharp as a billiard ball, it was difficult for me to discern the fruit at 8:00 a.m. Parker rated it at 89-91 points, Decanter rated it at 17 points (best Beauregard ever?).

Onward to Château Gazin. Both Gazin and Beauregard lie in the eastern part of the appellation, Beauregard in the South and Gazin in the North. Between them is the celebrated Petrus. We waved as we passed by. 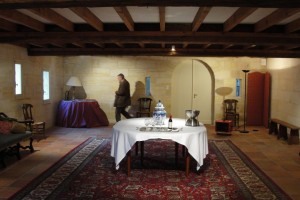 Elegant room at Gazin, our work before us

At Gazin, I was just coming to terms with the daylight. We entered a beautiful chamber to taste the wine. Here, we tasted the new wine out of a sample bottle in an elegant setting. Now I could taste better. 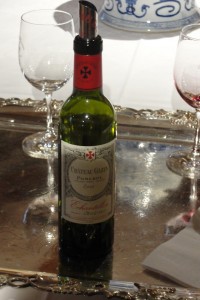 An echantillon, or sample, bottle

This was a bigger, beefier, richer wine with dark dense fruit but boy it needs time to evolve. Parker gave it 93-95 points, Spectator at 92-95 points, Decanter at 17.5 points.

Our first stop was Château La Dominique, whose border neighbors Pomerol. Coincidentally, the owners of Gazin owned La Dominique until the end of World War II. La Dominque is now owned by a wealthy family in the construction business. The estate enjoys a terrific location, adjacent to Cheval Blanc, Pomerol’s l’Evangile and La Conseillante. 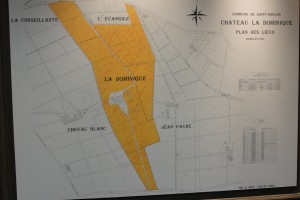 Our host was the estate director who first impressed us with his elegant shoes, apparently untouched by vineyard soils. 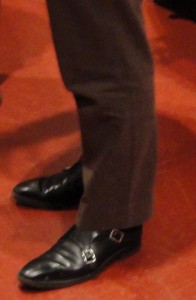 Not a speck of vineyard soils on those slick shoes...

We remarked on the construction of an enormous spaceship-style building at Cheval Blanc next door. He excitedly responded that while Cheval’s architect is renowned, La Dominique’s new architect is “number one.” He went on discussing the estate’s major new building plans while we were anxious to get on with the business of tasting wine.

Finally, the wines were presented and, in addition to La Dominique, we tasted Château Fayat and Clémont-Pichon. Fayat is a Pomerol estate named after the owners and Clémont-Pichon is in the Haut-Médoc. Maybe all the talk about architects and prestige turned us off but we were not impressed with the wines. 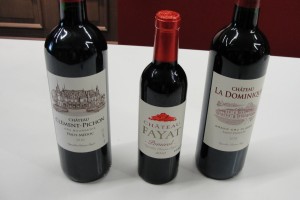 The whole shebang from La Dominique

Rain was starting to fall as we arrived at Château Figeac, another estate undergoing construction and improvements. Although we had to wait in the cool rain a few minutes, we were greeted warmly by Figeac’s owner, Count Eric d’Aramon. He himself proceeded to pour us the new vintage directly from barrel. No nonsense here, just great wine (by the way, his shoes were slightly muddy!). 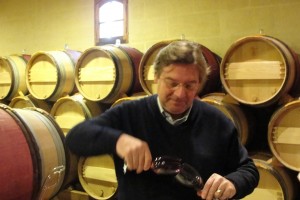 This was a magnificent wine; complex, rich yet elegant. Oddly, Parker did not review it. The Wine Spectator rated it at 93-96 points, Decanter at 18.5 points. 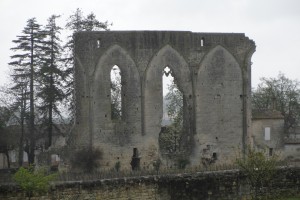 Church ruins mark the entrance to the village 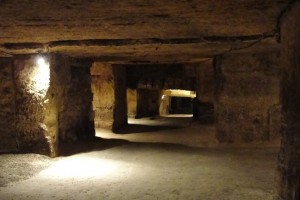 Now we went to the center of Saint-Emilion, next to the gothic church ruin is Clos Fourtet. This is an amazing estate with a 12 km maze of ancient underground limestone caves running under the village. The wine was inky, superb, concentrated with surprising freshness. Parker rates it at 95-97 points, the Spectator at 92-95 points and Decanter at 18 points.

We stopped in the village to purchase its famous macaroons and canelé, a local pastry. Then we departed for Pessac-Léognan across the river in Graves. 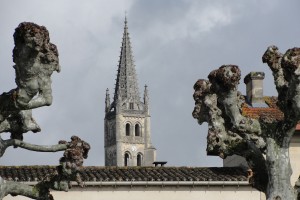