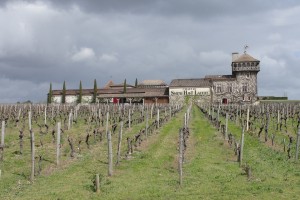 Our first stop in Pessac-Léognan, the heart of the Graves region by the city of Bordeaux, was Smith Haut-Lafitte. This is a terrific estate sustained by the passion of its owners, Daniel and Florence Cathiard. I first met them this January in San Francisco at the Union des Grands Cru Tasting of 2008. Bordeaux. 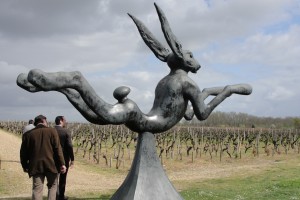 Hare to a fortune?

The unusual charming architecture of Smith Haut-Lafitte greeted us as we turned into the long drive, punctuated by startling huge metal statue of a cartoon-like leaping hare. I wondered why this incongruous wascally wabbit but I’m told real hares congregate around it at night. 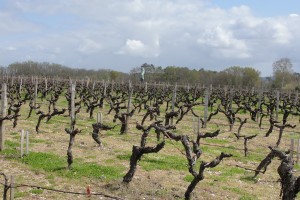 A chorus line of vines

The rows of old vines were tethered to wires like silent marionettes, frozen in joyous, chorus line dance.

Smith-Haut Lafitte (SHL) is one of the top estates in Pessac-Léognan, the heart of Graves. Graves is the major Bordeaux region south of the Médoc, home to its only First Growth, Haut-Brion. It enjoys a classification, begun in 1953 and revised in 1959, without any hierarchies except for Haut Brion. Sixteen estates are classified, thirteen for red wine, nine for white. SHL is classified for red wine. 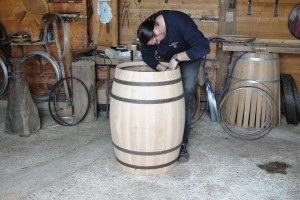 The cooper at work

SHL is unusual among Bordeaux châteaux in that it has its own cooperage (barrel making facility). Barrel making is an ancient Celtic craft requiring years of apprenticeship before becoming a cooper. Their cooper can produce two barrels daily.

We tasted both the white and the red. They were outstanding. The red was nearly black and opaque with terrific concentration. The white was rich yet nice acidity. Parker rated the red at 95-97 points, the white at 92-95 points. The Wine Spectator gave them similar scores. Decanter rated both wines at 18 points. 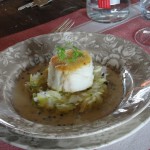 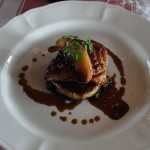 Just a bite at Smith Haut-Lafitte

We enjoyed a terrific lunch at La Table du Lavoir on the Château’s grounds.

Now it was on to Carbonnieux, classified for both red and white wines. This is beautiful estate with a small museum of antique cars. Both red and white wines were lovely but without the power or intensity of SHL. Parker rated the red at 91-93 points; the Spectator rated both at 89-92 points. 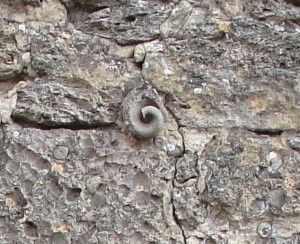 How did that guy get there?

Next stop was Haut-Bailly, classified for red wine. This is a beautiful sprawling estate. As we entered the cellars, I was impressed by the stone lintel above the entryway. There were mollusk shell fossils within the limestone! Proof this area had once been a seabed.

We noticed that all the fermenting vessels (cuves) were concrete which they chose for its temperature stability and the freshness they claim it gives a wine. This is not unusual in southern France and northern Italy. 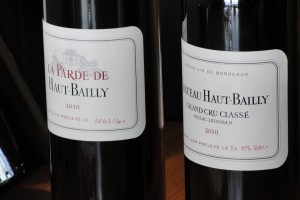 We tasted both the grand vin (flagship wine) and their second wine, la Parde de Haut-Bailly. The flagship was stunning, on a par with SHL but even tighter and denser – a beast. Parker rated it at 95-97 points. No rating from the Spectator (why?) but Decanter gave it 18.5 points. The la Parde was excellent, too.

It was starting to drizzle as we drove on to Domaine de Chevalier. It is classified for both red and white wine. We were greeted warmly by the energetic Rémi Edange, deputy director of the estate. He gave us a tour of this estate’s spectacular winery. 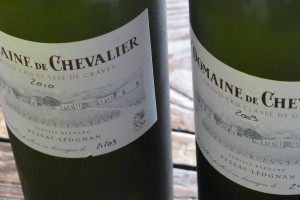 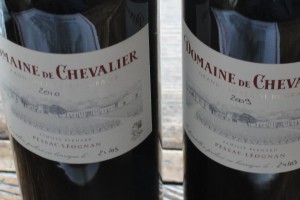 Our last stop in Pessac was at Fieuzal, classified only for red wine. This estate was under a massive expansion, which we toured. Director Stephen Carrier enthusiastically showed us around the new winery under construction. No fancy architect here, just functionality. 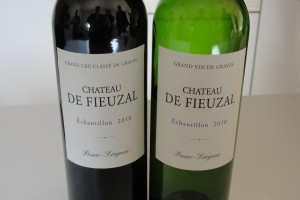 After Fieuzal, we undertook the long drive to Château Mayne-Vieil in Fronsac. This is a small, unassuming estate with working owners, the Seze family. Dusk was approaching and we were greeted by a light drizzle as we exited our car and walked to the austere offices. Bertrand Seze is the winemaker and his sister Christine Boye does the books and oversees marketing. At 7:00 p.m., they were both hard at work. Upon our arrival, Bertrand took us on a tour while Christine went to the house to make dinner. 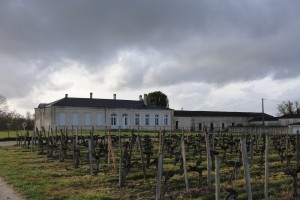 After our tour, we tasted the wines. They were delicious, more for drinking then collecting I thought, although the Cuvée Alienor is a big serious wine that is 100% Merlot. At our dinner, Bertrand brought out two old bottles. They were still excellent and we were stunned to learn one was from 1949 and the other from 1959. Incredible. Alas, these wines are not rated by the big reviewers. Happily, Mayne-Vieil and its siblings are imported directly into Seattle.

We left after dinner. It was dark now and we were exhausted by the long day. The rain was persistent, our mood now matching the weather. Our decision to drive on, made the night before, now looked overly ambitious; the task daunting. We had to find a place to stay somewhere between our location and Nîmes, a distance of 250+ miles.

After driving a cruel two hours, we decided to find a hotel in Toulouse, a city 160 miles from Fronsac. We arrived after midnight and our GPS told us many hotels were clustered by the train station. At night, rainy Toulouse looked forbidding. The road we took was lined with prostitutes at every intersection. With the incessant rain, it felt like we were in a scene from the film Blade Runner. We turned around and headed on in the direction of Nîmes. It was after 2:00 a.m. when we found a motel,La Couchée, at an autoroute rest stop. The manager resembled the crypt-keeper.

We took three rooms and awakened at 6:00 a.m. – three plus hours of sleep. Onward to our next tasting – breakfast of champions!