Refreshed from a whole three hours of sleep we set out at 6:00 a.m. for the village of Visan in the Southern Rhône. We had to make good time because it was nearly 240 miles away and we had a tight, ambitious schedule. We were due at our first stop, Domaine des Lauribert, by 10:00 a.m. for a comprehensive tasting of their full lineup of roughly 10 wines, plus lunch afterwards. Then we had to arrive at Chapoutier in Tain l’Hermitage, in the Northern Rhône, by 2:00 p.m. and it was 90 minutes away. After another large tasting of 20 wines, we would have to arrive in Burgundy, in Puligny-Montrachet, by 5:00 p.m. The last stop was 2.5 hours away; there was no way we could make it but we were happily unaware of this. 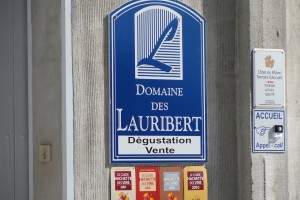 We arrived at Domaine des Lauribert in Visan punctually at 10:00 a.m. Thank goodness for GPS! Lauribert is located in the northern part of the Southern Rhône. Grenache is the main grape here blended with Syrah, Mourvèdre, Carignan or Cinsault. The white wines are often blends as well some combinations of Grenache Blanc, Clairette, Roussanne, or Viognier. The rosés are dry, crisp and delicious. 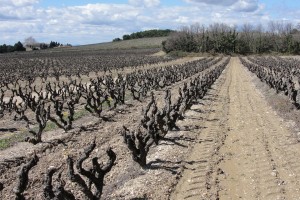 We were struck by the endless rows of old bush vines that we assumed were Grenache. We learned we were wrong; the vines were Syrah! We had never seen bush vine (or Gobelet in French) Syrah. Usually it is trained on spurs, like Cordon Royat, or canes like Guyot method. Cordon spur training is better for mechanical harvesting and bush vines are better suited to hand harvesting. 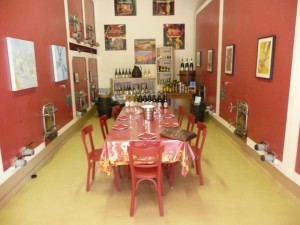 Viticulture aside, we had work our way through a large number of wines, selecting which ones my two companions from Vinum Importing would bring into the U.S. Our tasting would have real consequences for Vinum’s business. We loved the rosé but it would arrive too late so they might import it the following vintage. The wines were all very well made but we selected only a half dozen. Near the end of the tasting, they brought in platters of delicious finger foods. After negotiating pricing and delivery logistics, we bid our farewell to the fine people at Lauribert. It was just past noon. 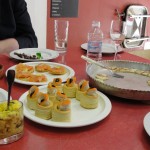 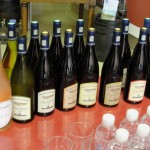 Most of the Lauribert line-up

Now on to Chapoutier, one of the greatest estates in the Northern Rhône. Maison M. Chapoutier, led by the energetic Michel Chapoutier, is located in the village of Tain l’Hermitage. As in Burgundy, the village appended the name of its famed hill to its name in order to increase its prestige (in Burgundy, it’s usually its finest vineyard). 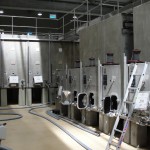 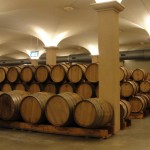 Chapoutier’s headquarters is modern, attractive and functional with an impressive shop next door. We met up with Pierre-Adrien Fleurant who drove us first to Chapoutier’s new, ultra modern winery by the autoroute on the outskirts of Tain. We viewed the vast arrays of large, spotless stainless and concrete fermenters and toured the enormous barrel cellar.

We saw Michel Chapoutier but he was giving a long interview to French TV so we unable to meet him. 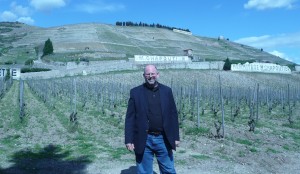 Afterwards, we visited the famous hill of Hermitage named after the twelfth century medieval crusading knight, Gaspard de Stérimberg. He settled on the hill, granted to him by Anne of Castille, Queen of Spain, and lived out his life there as a hermit thus giving the hill its name. You can see the producers’ names all boldly displayed on the hillside and the chapel of St. Christopher (owned by Jaboulet). Behind me are the Syrah vines that produce some of France’s finest red wines. The West and South facing top of the hill are its greatest climats or vineyards like Bessards, Le Meal, l’Ermite and Greffieux. 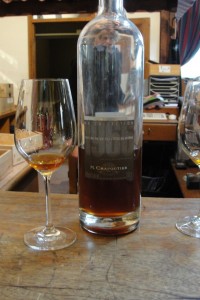 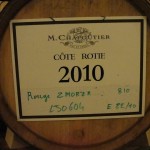 Baby Cote-Rotie ready to grow up

It was now after 2:00 p.m. and we had just returned to the headquarters to begin our tasting. Our guide generously poured us a broad array of wines from a simple Côtes de Rhônes up to the top single vineyard whites and reds (Chapoutier calls this top level the sélections parcellaires). The top wines were magnificent. Afterwards, we visited the shop and our guide poured us the estates top brandy, or eau-de-vie, which was a 1966 fine from magnum. It was incredible but too rich for me to buy at $150 for a half bottle. Instead, I purchased their non-vintage fine. They also make a marc which is a brandy made from pomace (skins, pulp, stems and seeds) but it is much rougher than fine. Additionally, I purchased two bottles of 1990 Chante Alouette l’Hermitage blanc. I tasted one bottle the other night and it was excellent.

We now set off for Burgundy. It was 4:00 p.m. and we had 150 miles to go to our next appointment. Alas, that was at 4:00 p.m. as well so we rescheduled it until early next morning. The second appointment was at 5:30 p.m. at Boyer-Martenot in Meursault. Our phone’s batteries were dead so we could not call ahead and they were closed when we arrived after 6:00 p.m. 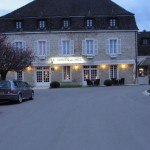 The restaurant Le Montrachet in Puligny 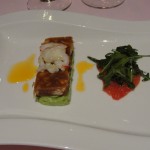 Lobster and avocado anyone?

We pulled into our charming hotel, aptly named the Hôtel les Charmes, in Meursault. After changing we went to dinner at an amazing restaurant in Puligny-Montrachet called Le Montrachet. Our dinner was spectacular and the wines? All were tasted blind in two flights. We tasted two whites first and correctly guessed they were both the same Grand Cru. We were surprised both by their age and the age difference between them. One was a 1984 Chevalier-Montrachet from Henri Clerc that tasted far younger; the other one was also a Chevalier-Montrachet, the 1997 “Les Demoiselles” from Louis Jadot. The Jadot actually tasted older than the Clerc! 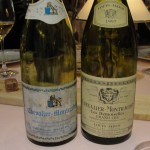 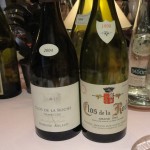 Now for some red Grand Cru - Why isn't it called Morey-Clos-de-la-Roche?

Next were the reds. We tasted two Clos de la Roche Grand Cru. Again, we recognized grand cru. They were a sublime 1998 from the great Armand Rousseau and a delicious 2004 from Domaine Arlaud.

Exhausted from little sleep and a long day, we headed back to our hotel and a restful sleep.