An exploration of Burgundy over dinner at Crush

Last night I was privileged to join a group of food and wine lovers for a magnificent dinner at Seattle’s Crush in Madison Valley.

James Beard Award winning Chef Jason Wilson oversees the magic that is Crush. It is a jewel box of a restaurant.

But this was a very special dinner. Burgundian wunderkind winemaker David Croix of Maison Camille Giroud was in town and his importer, Cordon Selections, and I arranged this dinner to celebrate his wines. I invited my best customers and we had a full house.

The menu and wine list is below. Every detail was perfect and utterly delicious – even the spooned scallop amuse-bouche – isn’t that the point? There was one exception regarding the decanting of the wines which I’ll discuss later on.

For this blog I’m going to focus on the wine; it’s something I know and can write about. I’ll do my best to describe the food.

Our first course was the Hon Hamachi Crudo (raw) with drizzled black (fermented) garlic and balanced by Fava Beans accented by radishes. Hon Hamachi is Japanese farm-raised premium yellowtail tuna famed for its taste. Chef Jason ferments the garlic on his roof! The dish was paired to a 2008 Puligny-Montrachet Champs Gain 1er (premier) cru. This was textbook Puligny, racy, mineral driven with brilliant lemon and pineapple fruit. Its crisp acidity cut through the flavors of earthy, salty, meaty and piquant like a laser beam.

It was time to shift to red.

The next dish was a study in modulated, perfect earthiness. House-made Tagliatelle was perfectly textured with just the right degree of firmness. Chef Jason used this as a bed for freshly caught (18 hours) basil fed snails from his local seafood provider along with Porcini mushrooms, Summer snap peas (great firm texture!), Chervil and black pepper crême fraiche. The latter added the right touch of richness without smothering the other flavors, perhaps getting a lift from the touch of black pepper. 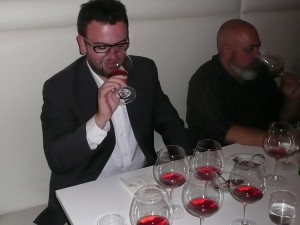 This flavorful ditty, a bit delicate, was perfect with the 2002 and 2008 vintages of Côte de Beaune Villages. Now this appellation gets little respect. Its often cooler because it’s up slope from the finer real estate. Thus its grapes ripen later and not as fully, unless it’s a warmer vintage like 2003, 2005, and 2009.

How these wines then defied expectation! The 2002, a classic vintage, was surprisingly fresh, youthful and rather rich with beautiful raspberry flavors. The 2008 was lighter with a bit more tart acidity but it was not thin. It was tight and you could sense that there was more substance hidden there.  I wish it had been decanted so it would have a chance to open up.

I like the 2008s. It’s an underrated vintage, especially for reds. I’ve tasted over 200 Burgundies from 2008 and it’s a great year for whites but the reds get more impressive with time. They are not as ripe, lush and full-bodied as 2005 or 2009 but they will last and already show good power combined with elegance.

David Croix spoke in similar terms about the vintage. He’s a modest young man who is a proponent of organic and biodynamic viticulture. David ardently desires that his wines faithfully reflect their terroir, using low yields, only native yeasts, avoiding over extraction and over-oaking. He wants age-worthy wines but lets the vintage decide that characteristic, not his winemaking.

Now it was time to approach Burgundy’s zenith, the Grand Crus. The menu stepped it up accordingly.

Next up, Liberty Farms Duck Breast scented with Grains of Paradise and accompanied by a soubise of Walla Walla onions (a kind of onion-infused béchamel), duck confit, pickled ramps and quinoa. Ramps are a family of wild leeks, the first of Spring’s vegetable harvest and they are pickled to preserve them for enjoyment later in the year.

The Liberty ducks are raised in Sonoma County and are a strain of Pekin Duck that was developed in Denmark and is suited to a slower, less stressful style of rearing. The farm’s web site goes on to affirm that “Liberty Ducks receive no antibiotics or hormones and are fed a diet that consists largely of corn and other grains. The combination of all these factors result in the best, most flavorful duck available in the country today.” The consensus of our diners concurred.

As for the poetically named grains of paradise, Amanda Hesser, writing for the New York Times, beautifully described the spice, which comes from Africa: “I put a few between my teeth and crunched. They cracked like coriander releasing a billowing aroma, and then a slowly intensifying heat, like pepper at the back of my mouth. The taste changes in a second. The heat lingered. But the spice flavor was pleasantly tempered, ripe with flavors reminiscent of jasmine, hazelnut, butter and citrus, and with the kind of oiliness you get from nuts. They were entirely different from black peppercorns and in my mind, incomparably better.”

Yum. The 2008 Corton Grand Cru stood up to this amazingly flavored dish. Here, the wine’s tobacco spice and dark berry flavors were once more a great complement to the dish. What more would we have tasted if the wines had been decanted for 2-3 hours? This question continued to haunt our evening because you just tell that more was waiting to come out from all the reds. I patiently swirled and swirled to aerate the wines as best I could. 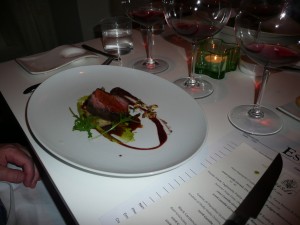 A well dressed Loin of Lamb ready to be enjoyed.

The next dish was a sensationally tasty black cardamom roasted Anderson Valley lamb loin with basil artichokes, grilled celeriac, currant tapenade and Shiraz sauce. It was greeted by a trio of Grand Cru from the village of Gevrey.

The lamb came from Oregon’s Willamette Valley. They eat only grasses, no byproducts. Like the ducks, the lambs are given no antibiotics or growth hormones and, in both cases, these are family producers who have been around a minimum of four generations.

The lamb dish’s rich flavor was a harmonious match to the three Grand Crus, all fro the 2008 vintage. Lined up were the Charmes-Chambertin, a Latricières-Chambertin and the big guy, Le Chambertin. Gevrey boasts 8-9 Grand Crus, depending how you count Mazoyères-Chambertin. What was fascinating about this line up was that the vineyards are so close to each other. Without the variables of winemaker, vintage, and grape (I believed they were picked at similar times), we had a perfect study in terroir. And how different the wines were!

The Charmes was the most evolved. It was rich, lush with ripe, dark fruit; it fitted its name. The Latricières was very tight, perhaps the most elegant of the three. The Chambertin was clearly the most powerful and ageworthy of the three. My kingdom for a decanter! Very clear difference all of us, including less experienced tasters, could discern. Everything the same but for site. Terroir is not a myth, as some would have us believe. You can taste it. Amazing.

Dessert was light and fresh, aptly titled “A Tasting of Summer Strawberries & Rhubarb with Goats’ milk, Yuzu and Sassafras. Yuzu is a Japanese citrus fruit famous for its aromatic rind. Sassafras is a type of bushy tree whose root smells like root beer. In fact, when I was a wee boy at Summer camp in upper New York state, we used to forage for the roots, boil them and, if memory serves correctly, make a passable root beer style sweetened beverage. 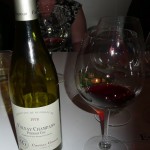 Before dessert we were presented with the featured wine, a 1978 Volnay 1er cru Les Champans. David spoke about the wine noting that the vintage was outstanding. The proof was in the glass; the wine was unbelievably fresh with good acidity and ample lush fruit. I detected a hint of pipe tobacco on the nose.

Near the end of this marvelous evening, the distributor passed around a treat. A 2008 Nuits-Saint-Georges 1er cru Clos de la Maréchale from Jacques-Frédéric Mugnier, one of my favorite producers. The Clos is a monopole, meaning that it is owned by one person, Mugnier. It’s a rarity in Burgundy. The wine had been opened a while so it was more ready to taste and it was surprisingly lush and rich. A nice punctuation to a great evening.