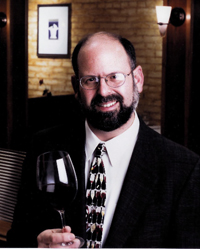 Arnie Millan
Arnie is a Sommelier certified by the Guild of Sommeliers. He has been a wine aficionado for nearly thirty years. During his first visit to France in 1973, Arnie toured several French vineyards and began to learn about wine from wine merchants and collectors. Arnie has been consulting to restaurants about wine since 1987. In 1997, he opened his own restaurant, Avenue One. Avenue One was highly regarded for its extensive and carefully chosen wine program, winning four Wine Spectator Magazine Awards of Excellence and accolades from Wine Press Northwest, Seattle Magazine and other publications. He recently appeared in the video, “Wineworks: The Complete Video Guide to Wine,” available in selected wine shops and book stores.

Arnie has been a guest sommelier at Taste Washington and he has been in charge of acquiring the wines for the 2002 – 2006 Beaujolais Nouveau Festival at the Fairmont Olympic Hotel, sponsored by the French-American Chamber of Commerce. Since 2003, Arnie has been a Guest Sommelier for the Auction of Northwest Wines at Chateau Ste. Michelle, He has been a member of the Seattle chapter of the Chaine des Rotisseurs and other food and wine organizations. Arnie also has been privileged to judge the Boeing Wine Fest for four years, Seattle Magazine’s Washington Wine Awards as well as the Seattle Wine Awards in 2007 and 2008. In 2004, Arnie was elected to the Board of the Pacific Northwest Chapter of the American Institute of Wine and Food.

Arnie frequently teaches wine classes and conducts wine dinners and tasting parties, both public and private. He also consults for restaurants and private collectors/clients on the West Coast. Arnie also has conducted tastings for a division of Robert Mondavi wines.

Arnie and his wine classes were featured in The Wall Street Journal, “Learning the Ropes about Vines” published February 10, 2006. Recently, Arnie was chosen to teach a class on wine tasting to the Washington Wine Commission’s volunteer wine ambassadors.

In July, 2014, Arnie was featured in the  Seattle Times as “The Finest Wine Mind in Seattle.”

Arnie has re-joined Esquin Wine Merchants, as European Buyer, heading up Private Client Services and Education where he works Tuesday through Saturday.